2020 is the third year in a row of walnut freeze damage in California. In 2018 there was a sudden autumn freeze event in November, during the Camp Fire, which we documented as trees failed to leaf out in spring, as well as the recovery later that spring, and one year later.

Some Sacramento Valley walnut growers, particularly those with orchards in cold spots that had damage from 2018, also reported 2019 freeze damage during the 2020 growing season. However, early observations indicate that the autumn 2020 freeze damage may be far more extensive than damage from the previous two years.

Our initial best guess for the cause of the tree damage we are observing in April 2021 are freeze events on the mornings of Nov. 10 and 12 2020 (table 1). Temperatures had previously been unusually warm in the first two weeks of November with highs around 80 degrees during the first week and only one morning of temperatures near freezing before temperatures dropped well below freezing on the 10th and 12th (figure 1).

The swing from daytime to nighttime temperature extremes may help explain the severe damage, according to UC Davis plant physiologist Maciej Zwieniecki. During these warm daytime temperatures, limbs contain starch, which does not provide protection from freezing. Slow cooling is needed to promote starch degradation into sugars, which protect against ice formation in cells. Our last November autumn freeze was a fast-cooling event with temperatures at times dropping 5 degrees per hour that interfered with starch being degraded into sugars, leaving trees more susceptible to cold injury. In addition, pomologists and biometeorologists believe that several nights of temperatures at or just above 32oF are critical in hardening walnut trees off and providing freeze tolerance ahead of subfreezing temperatures. 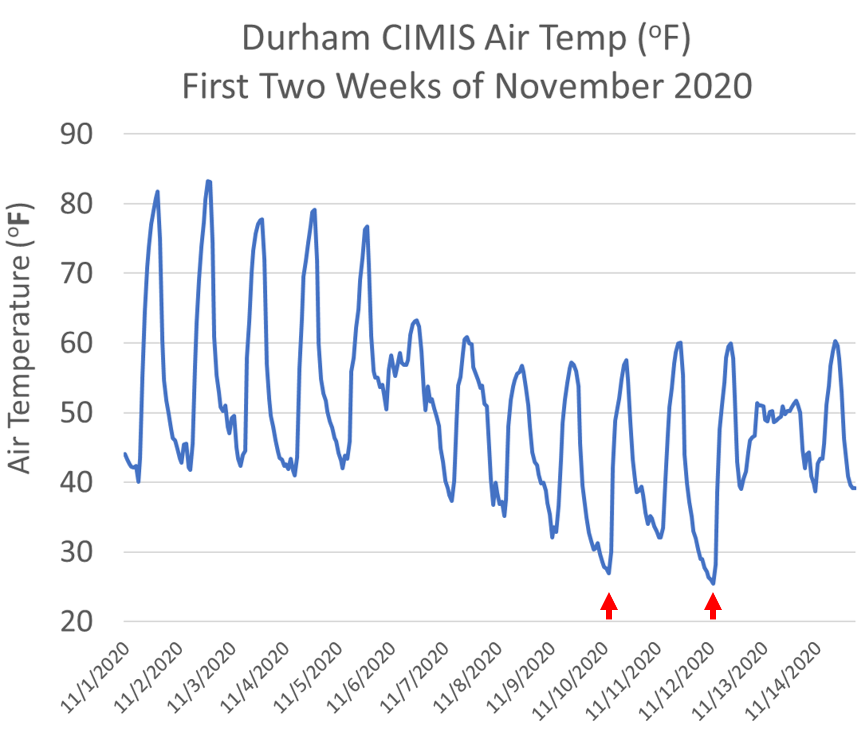 Figure 1. Durham California Irrigation Management Information System (CIMIS) station air temperature (oF) data for the first two weeks of November 2020, the temperatures were well below freezing during the mornings of the 10th and the 12th (see red arrows).

Why were some walnut orchards severely damaged while adjacent orchards were largely spared? As with our 2018 freeze, we believe one orchard specific factor that in many cases helps explain why some orchards were affected and others were not, is moisture at the top of the soil profile preceding the freezing conditions. We are still in the early efforts of surveying growers about their irrigation practices ahead of the 2020 freeze event. However, as with the 2018 freeze, it appears that most growers who last irrigated in early to mid-October faced more severe damage than orchards irrigated in late October or early November. We will be developing a survey to help determine what factors contributed to freeze damage.

What should you do with freeze damaged orchards?

Photo 2. On otherwise blank branches, some adventitious buds were beginning to push on this Howard tree on April 19, 2019 following November 2018 freeze damage (A, by Janine Hasey). These adventitious buds appeared to continue to break later into spring (M, photo May 31st, 2019, by Luke Milliron). 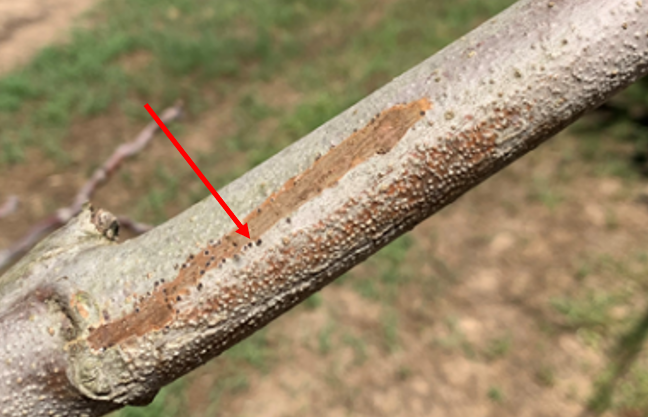 How to prevent future damage? 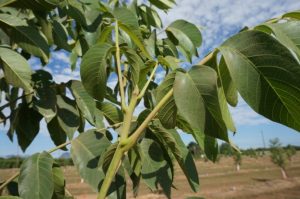 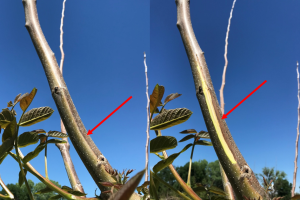 Photos 5 & 6. This characteristic distinct margin of dead and living tissue is typically seen in young orchard blocks. Shown both before (left) and after cutting (right; photos: Luke Milliron).

We want to thank Maciej Zwieniecki, Mohamed Nouri, Kari Arnold, Astrid Volder, Joe Grant, Bruce Lampinen, Rick Snyder and many others for their assistance diagnosing the November 2018 and 2020 freeze damage.