The October Position Report, released by the Almond Board of California on Nov. 11, showed that October shipments amounted to 214.61 million pounds. This was a decline of 1.1% on the year and the lowest October shipment since 2015.

Although the October shipments were significantly below average, they were still at the higher end of industry expectations. Prior to the release of the report, a survey conducted by Mintec estimated that October shipments would be in the range of 180-230 million pounds. The majority of market participants returned figures of 195-210 million pounds. The full results of the Mintec pre-Position Report survey can be found via this link.

Despite this, market participants expected limited impact on prices, with one U.S. trader stating prior to the release, “For there to be any major impact on prices, I’d say shipments would have to be over 240 million pounds. Any figure below that is unlikely to significantly lift the market.” 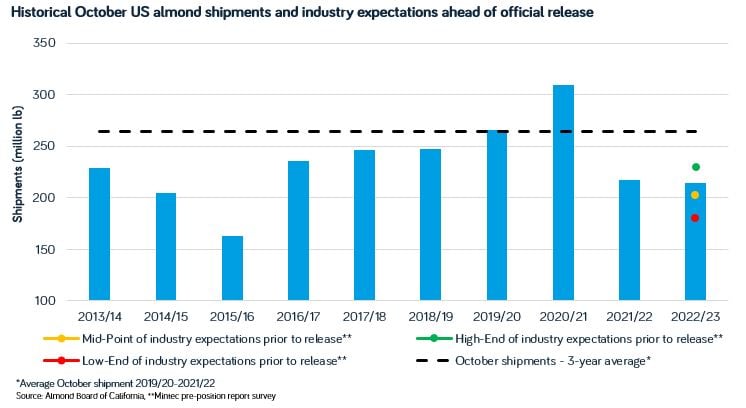 New sales continued to underperform compared to average, with 243.48 million pounds committed in October. The total industry sold position was 39%, down three percentage points year-on-year and nine percentage points below the 5-year average. The trend of low commitments is expected to continue throughout the season with buyers adopting a hand-to-mouth purchasing approach in the face of uncertain demand due to the ongoing squeeze on consumer budgets.

“It is very difficult to forecast our sales given the current economic climate. As a result, we are trying to be more reactive in our purchasing strategy and buying in smaller volumes, rather than locking in large volumes in advance like we would in a normal year,” a buyer disclosed to Mintec.

To stay up to date on developments in the almond markets, subscribe to the Mintec Weekly Almond Report by emailing PRA@Mintecglobal.com. The report, which is released each Thursday, provides in-depth information on pricing and market dynamics. 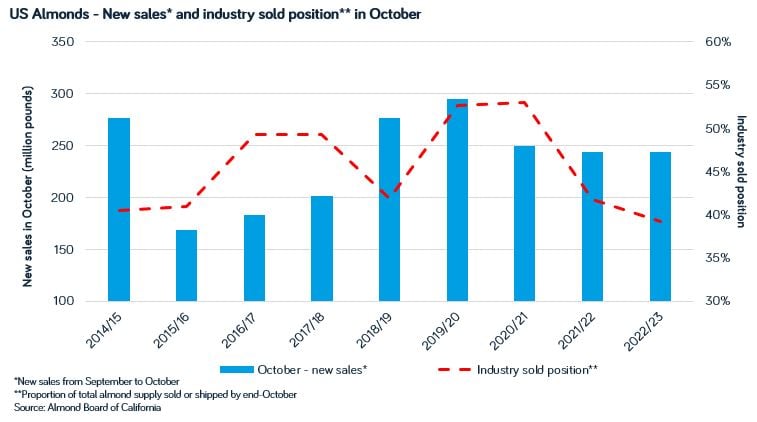